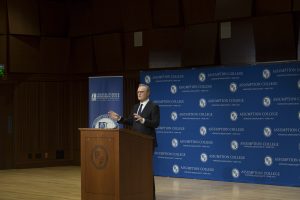 This past Thursday, Assumption College’s Department of Political Science hosted the opening of the Daniel Patrick Moynihan Center for Scholarship and Statesmanship. This center is named after the late senator from New York, Daniel Patrick Moynihan, who served in the Senate from 1977-2001. He was also the U.S Ambassador to India and the United Nations as well as an advisor in various White Houses. He worked under Presidents Kennedy, Johnson, Nixon and Ford during these times before entering the Senate.

The event was hosted in the Tsotsis Family Academic Center and the inaugural speaker was none other than Lawrence O’Donnell. O’Donnell currently hosts “The Last Word” on MSNBC and before that he was a personal aide to Senator Moynihan.

O’Donnell’s lecture took place in the Curtis Performance Hall after a brief reception in the lobby. The speech lasted a little over an hour and focused on the life and legacy of Senator Moynihan. Since O’Donnell was an aide to Moynihan, he knew a lot about the man and the politician.

He opened the speech by talking about how he came to know Senator Moynihan and his family. O’Donnell’s first encounter with Moynihan was as a Harvard student in the 1970’s when Moynihan was a professor there. He was quickly intimidated by the future senator shortly after entering the classroom and then proceeded to drop the class.

O’Donnell’s next encounter with Moynihan was in the 1980’s in New York where he was then a struggling young writer. There he ran into Moynihan’s wife and gradually developed a relationship with her and her husband.

After getting to know the Moynihan family, O’Donnell was then offered a job on the senator’s re-election campaign. After Moynihan was comfortably re-elected, O’Donnell was then given the opportunity to work as a personal aide to him down in Washington. O’Donnell was at first uncertain of whether or not he should take the job, but was then persuaded to do so by his wife. She simply told him that he could quit if he did not like it.

So from 1989-1995, O’Donnell served as a legislative aide and worked closely with the senator on all of the pressing issues then taking place before Congress, such as the healthcare debate in the early ‘90s. In addition to talking about how Moynihan was extremely popular in his state and incredibly dedicated to his job as a senator, O’Donnell also discussed what made Moynihan such a wonderful person to work for and be around, especially his sense of humor.

O’Donnell then spoke about how Moynihan was committed to what he believed in while willing to compromise at the same time. He specifically brought up how during the Clinton administration, Moynihan made a deal with the Republican senator from New York where he would get to choose 25 percent of all federal court picks in New York during President Clinton’s term. Moynihan would then get to choose 25 percent of the court picks in New York during the next Republican president’s term. These were the only two senators to ever do this and this showed how Moynihan got along well with his peers.

However, Moynihan also had an incredible intellect and knew a ton of information. O’Donnell explained how Moynihan would often start a conversation with the expression, “Well, I don’t know much about this but…” and then proceeded to spew out a lot more information than the average person knew.

O’Donnell ended his speech by saying that there has never been and there still is not anybody like Daniel Patrick Moynihan in American politics. His incredible intelligence and background as an academic, White House advisor and senator made him truly respected among his colleagues. His memory not only lives on because of who he was and what he did, but because he took the titles of scholar and statesman to a whole new level.

END_OF_DOCUMENT_TOKEN_TO_BE_REPLACED

Nicholas Sposato, Staff Writer As anyone who has visited the popular site would know, YouTube is home to a grand variety of content. Music videos, tutorials, vlogs and more have been uploaded for viewers around the world to access and enjoy. Similarly, there is a diverse array of content... END_OF_DOCUMENT_TOKEN_TO_BE_REPLACED

Olivia Burke, Staff Writer Is climate change real? Yes. Do we need to do something about it? Yes. Are we doing enough for it? No. Greta Thunberg is a young climate activist from Sweden. Starting in the summer of 2018 and subsequently every Friday, Greta started sitting outside th... END_OF_DOCUMENT_TOKEN_TO_BE_REPLACED

Skyler Hesch Staff Writer On Monday, April 1st, Agape Latte hosted their second event of the semester in Charlie’s. Despite having to cancel their event many times, due to illnesses and conflicts, Agape Latte was finally able to reschedule their event. This event’s musical gu... END_OF_DOCUMENT_TOKEN_TO_BE_REPLACED