This semester is going to be a very reflective one. Between internships, my independent community service study and last time working on the Provoc, I will be taking many moments to reflect on my experiences at Assumption and most times, putting it here in my column.

To start off, I’d like to talk about my latest spiritual experience that came from a week of service. Don’t be fooled, it’s not actually about community service.

You know that feeling, when something takes your breath away? You stop and gaze with your mouth gaped open and your lips cracking under the swift movement of the bitter breeze. Your eyes start to water. Your forehead starts to harden. Your lungs start to slow as the airflow to your body diminishes. This is what it feels like to have all your inner thoughts released. All you feelings come alive and are exposed to the crisp, January air. These thoughts and feelings translate into your actions – constantly reaching out and trying to ground yourself; connecting yourself to your surroundings. This is realizing just how small you fit into the world that is your own.

On my SEND trip to Washington DC this past break, I realized just how impactful our nation’s soldiers are. Normally you hear about military families through others, school lessons and various videos of veterans returning home on Facebook. This time, I felt the presence of an entire army of fallen soldiers, their families and their sacrifices while standing in the World War II Memorial.

I never thought how profound and loud an empty space could be – especially one the near size of a soccer field. It was as if I was walking through a living cemetery and if I made too much noise, the residents would awake. I saw a photograph of a recently fallen hero under his respected column of his home location. I felt an urge to fall to my knees and offer my gratitude and condolences but could not find the means to make my legs bend. I continued walking and found an inscription: “Sicily” it read – the place where my Nonno Vincenzo was stationed during the war. For a brief second, I realized my place among those walls. I was impacted by a legacy of men and women who sacrificed more of their lives than most had bargained for – more than I believe I ever will – my Nonno included. I felt a strong sense of family and how a new family seemed to emerge from the ashes of past war efforts.

Featured Quote: “The media’s the most powerful entity on Earth. They have the power to make the innocent guilty and to make the guilty innocent, and that’s power. Because they control the minds of the masses.” – Malcolm X, civil rights activist

Featured Song: “I’ll Be There” by Jess Glynne

Featured Image: Reflection in the pool 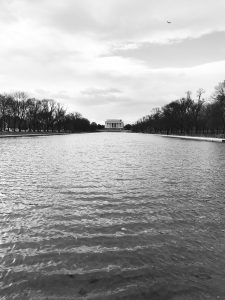 END_OF_DOCUMENT_TOKEN_TO_BE_REPLACED

A Recap of the Football Season

Adam Ide Sports Editor With the Greyhound’s loss on Nov. 19 in the first round of the National Collegiate Athletic Association (NCAA) Division II playoffs, the Assumption football season has come to a close. The loss came at the hands of No. 20 Slippery Rock... END_OF_DOCUMENT_TOKEN_TO_BE_REPLACED

By Naima Rauf, Staff Writer Though we are all dragging by the end of April, here are a few tips on how to finish out the academic year in the best shape possible. Review your grades and reach out to professors if you notice there are outstanding grades. 2. Set... END_OF_DOCUMENT_TOKEN_TO_BE_REPLACED