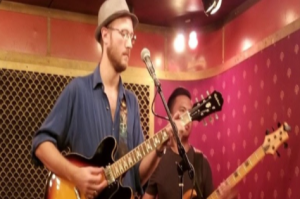 How’s life been treating you?

Life is what it is right now I suppose! Life is ok haha, my wife and I live in Brooklyn, New York so until recently we’ve been semi-locked down for what feels like forever. But it only takes a quick look at the wider world and a little compassion to realize that we are very lucky to have what we have, to be where we are and doing what we’re doing. A deep gratefulness is born out of stepping back a little and looking at the bigger picture.

From majoring in Aerospace, Aeronautical Engineering at the University of Southampton to becoming a musician, take me through the journey of changing your career path?

Yes it’s quite a convoluted path I’ve taken in life haha. If you’ll allow me, I’ll go back a little further to when I first picked up a guitar with a serious intention to learn how to play it, when I was around 9 or 10 years old (this would be in England where I was born). I became obsessed with The Beatles at that time, and later on with Blues music, and spent every free moment I had trying to figure out how to play along to the songs. And I think deep down that’s what I’ve always known I’ve wanted to do with my life since those early formative years. Music, playing guitar.

Writing songs. Nothing else made me feel that way. But at the same time, I was cultivating a deep interest in all things aviation – my father is a private pilot and would take me flying numerous times, showing me how the instruments worked, letting me take control and actually fly. Eventually I’d learn to take off and land. Really fun experiences that got me really interested in flight. Long story short, through chats with career advisors at school (who thought music was nothing more than a hobby and I should pursue something more noble like flight!), I ended up applying for a scholarship with the Royal Navy that would put me through University studying aerospace engineering. And I got in! But after a year at Uni and a lot of training with the Navy I decided that the military life really was not for me, and so I cut out. Just in time I think, because if I’d had left it any longer I don’t think they’d have let me! I still liked the course however, and thought I would at least look at pursuing a career in aeronautics if I could, so I continued and graduated as a Bachelor of Engineering with a very average grade.

All through this I continued playing guitar, dreaming of starting a band and recording, touring, all of it. So I had 2 options really – try and find a job in the aviation industry with a very average degree, something that my heart wasn’t really in, or be true to who I was and accept that the only thing I could really do that made me happy was to be a musician. So I chose the second. I lived in North London for a bit, temping in offices and playing gigs at night, then made the move to New York City in late 2007 with no objective other than to play as much music as I could!

Success to me comes in 2 parts – there’s creative success and financial success. I consider myself creatively successful – I know that I am a decent guitar player. I’ve made records and toured, written songs that I really like. I’ve achieved those goals, so that’s success to me.

Am I financially or famously successful? Nope. I’m on unemployment and have very little money to spend on things other than food and rent. But that kind of success can be a double edged sword, as many a famous/financially successful artist will tell you. I don’t put much thought into that. I’d love to be able to financially sustain myself through music, that is absolutely a goal, but beyond that it’s all material fluff.

My creative process is pretty open and fluid in the sense that I don’t sit down and write out task lists or set aside specific times of the day to write, although the morning/early afternoon is usually the most productive part of my day. I’ll pick up the guitar randomly most days and just fool around with chord progressions and licks. Sometimes something pops out at me (chord progression or a melody line) and I’ll pursue that.

I usually have 1 or 2 songs that I’m working on that have come to me this way. Very occasionally I’ll not be playing anything at all and some little melody or chord structure happens in my mind and I’ll immediately go to the guitar and try to figure it out. Lyrics are a different matter, and always come last haha. Lyrics don’t come as naturally to me as the music might do, so it takes a little more patience and a trial-and-error approach to get those together. I read a lot of books so that helps!

My go to food is (not surprisingly) British comfort food – bangers and mash, or fish and chips and the like. My mother is from India so I grew up with a lot of Indian food too, which I also love. Chicken Korma, samosas and all that good stuff.

During these past few months what have you learned from COVID?

I’ve learned a little about how viruses work, how transmission can work. What it means to be considerate of other people’s space and all that. I’ve also learned that a lot of people don’t like being told what to do, even if presented with evidence that they could really help out their fellow neighbor and the situation at large if only they would do that thing. ‘Truth’ or ‘facts’ have somehow become purely subjective ideas.

One day soon some people will be convinced 2 plus 2 equals 5 because they found the ‘truth’ somewhere on the internet. There’s a serious problem with tribalism out there, and it’s very much a case of ‘us vs them’. Left vs right, black vs white, patriot vs traitor, mask vs no-mask. It was all there before of course, but Covid really put it under the spotlight, along with other events of 2020. It’s very sad indeed. Having said that there are so many people out there with love and compassion and forgiveness and understanding in their hearts and minds, and that is the real humanity right there. We get shown the dark underbelly of our existence all the time, but there is a lot of good out there too.

What would be your dream collaboration?

Ooo boy, it would have to be a collaboration with Eric Clapton or Paul McCartney, someone like that. Dave Gilmour of Pink Floyd. I was very lucky to see Buddy Guy perform early last year, if I could play guitar with him on stage I’d have made it!

Do you have any mentors?

I can’t say I have a mentor really, not in the flesh. When I was young my heros were George Harrison, Eric Clapton, and Jimi Hendrix so I would obsessively listen to all their music and play along. Mentorship through time and space or some such.

My name is Caleb White and I'm a Communication & Media major in Assumption's Class of 2024. Some of m... END_OF_DOCUMENT_TOKEN_TO_BE_REPLACED

My name is Caleb White and I'm a Communication & Media major in Assumption's Class of 2024. Some of m... END_OF_DOCUMENT_TOKEN_TO_BE_REPLACED

Nicholas Sposato, Staff Writer As anyone who has visited the popular site would know, YouTube is home to a grand variety of content. Music videos, tutorials, vlogs and more have been uploaded for viewers around the world to access and enjoy. Similarly, there is a diverse array of content... END_OF_DOCUMENT_TOKEN_TO_BE_REPLACED

Olivia Burke, Staff Writer Is climate change real? Yes. Do we need to do something about it? Yes. Are we doing enough for it? No. Greta Thunberg is a young climate activist from Sweden. Starting in the summer of 2018 and subsequently every Friday, Greta started sitting outside th... END_OF_DOCUMENT_TOKEN_TO_BE_REPLACED

Skyler Hesch Staff Writer On Monday, April 1st, Agape Latte hosted their second event of the semester in Charlie’s. Despite having to cancel their event many times, due to illnesses and conflicts, Agape Latte was finally able to reschedule their event. This event’s musical gu... END_OF_DOCUMENT_TOKEN_TO_BE_REPLACED