At the age of 16 years old she signed up for a song writing competition after competing against others she was selected as the top 10 artist and was able to have her song played on the radio. Her song Heartbreaker ended up on radio 92.5 the river. After digging deeper, I learned that she wrote this song after her friendship ended with a close friend and this was he way to express her emotions. Another accomplishment she mentioned to me was having her song Miss. Louisiana played on the radio in New York!

To listen to her song Miss. Louisiana (click here)

If Ms. Sully could change the entertainment industry she would want those who have talent to be recognized by those in power.

Claire considers her strengths are song writing, and being proficient in English, Spanish and Italian. Going off of this, she has in the past sang in Spanish. On the other hand, her weaknesses are writing melodies.

Besides making music and melodies, she enjoy dancing to pop and country music, hanging out with friends and watching horror, drama and romantic comedy movies. However, there is one hobby many people do not know about which is skateboarding.

Some individuals she considers are her mentors are her twin sister who gives her advice, from time to time. In addition to this, her guitar teacher Steve helped shape her into the musician she is today. Lastly, Ric Poulin  who was her Artist Manager who worked at Bristol Recording Studio helped her develop her sound. Another group that has helped her during her music career is her fans, during a concert she messed up the lyrics in Nashville but was helped by the audience.

Style and entertainment mean telling a story according to Ms. Sully. Her favorite music memory was during an open mic in 2011 in a coffee shop called Radio Bean in Vermont.

This is her 1st ep, which she is able to work with Lerumo the Popstar who ranks #2 charting pop star in Africa next to BTS and J pop Group. They connected on Facebook, while this pandemic has caused change in so many of our lives, she has felt imperative to express how she feels.

* This is an upbeat pop song! 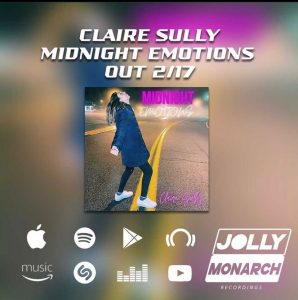 First off, it is important to do your research, through doing so you’ll be able to understand who gains what, in addition to this you’ll feel more at ease knowing what is to gain and lose if you choose to walk away.

During Claire’s time at Dean was filled with ups and down, she majored in communications. During her time at Dean she connected with John Rooke and Vic Michaels who were her professors.

First and foremost, making sure you have the time to do the task is the most important!

In Ms. Sully’s free time you will find her writing and researching the latest trends.

Through IKONIC MANAGEMENT she has completed various takes, however, due to COVID many of her opportunities have been put on hold such as NY Fashion Week. However, she is still making gains through commercials.

* When it comes to auditioning it is important to come in natural makeup and keep an open mind.

While music isn’t taken seriously where Claire is from, she has made several gains by going out on her own. While she has strict parents, she admires them for having her work harder for what she wants.

Through Boston Casting she was able to find jobs such as being in a commercial shown in Mexico called instabet. In addition to this she also played a movie set extra, through the show Defending Jacob she played an extra reporter. During which she was able to connect and meet Chris Evans. To view (click here).

She wants to venture out to another city, which will offer her bigger projects, from the fashion, and entertainment industry. Hopefully New York City, Nashville or Los Angeles. Through these cities she feels she will be able to acquire more opportunities in films, music and of course fashion! 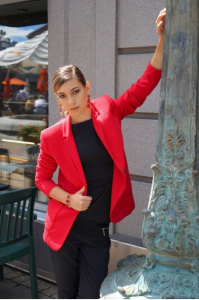 END_OF_DOCUMENT_TOKEN_TO_BE_REPLACED

Don’t be so hard on yourself

Kate French, Staff Writer As a senior, I know I am not alone as I experience the looming threat of the uncertainty of post-graduation life. I began my freshman year at Assumption as a Biology major with only a vague idea of what I hoped to accomplish in life. ... END_OF_DOCUMENT_TOKEN_TO_BE_REPLACED